A Zoom meeting was organised for Tuesday 16th February to bring the ARIADNEplus partners up to date on the latest project developments and plans for the future. Franco Niccolucci set the scene by reminding the audience of 74 participants of the questions they should be asking of ARIADNEplus and what can be achieved in the current project and beyond. Framed in the context of FAIR, examples of these questions and the issues raised were:

FIND – what data is left to find, how much more of it is there? What criteria should be defined for new contributions? How can the pipeline (for ingesting data into the Portal) be simplified for the future?

ACCESS – a global certification system as used by other professions is needed for the Cultural Data Space as envisaged by the forthcoming Digital Europe programme.

INTEROPERABILITY – there are still pockets of resistance to overcome. Item-level integration has also to be addressed.

RE-USE – reuse is achievable but ‘pick and mix’ use of data is more difficult as this requires rich metadata, possibly paradata, and the definition of minimum criteria.

Conditions for all of the above involve data curation and the use of Data Management Plans for each data collection as well as DOIs and possibly repository certification. With regards to paradata, procedures and protocols must be established. The data itself should be quality assessed, perhaps a synthetic index could be used but who creates this? Furthermore, machine readability should be enabled and it should be possible to use Artificial Intelligence on the data.

Johan Fihn Marberg was the first presentation regarding progress made with the new Portal. The Map function (Where?) has been significantly updated with direct links to resources and the additional of several new filters and layers, e.g. satellite view. The use of historical maps is currently being explored. There have been no major changes to the Timeline function (When?) and it is acknowledged that the Word Cloud (What?) is crude and not optimal. Keyword facilitation is being investigated to improve this. The resource landing page has also been updated with more features to find similar resources. Upcoming plans include adding multi-lingual capability and expanding the auto-complete (of search terms) as well as improving the “What” function. Further enhancements to the Map will allow polygon-shaped areas of interest as well as other geometric structures and to distinguish between exact and derived points. The temporal search will enable the use of archaeological time periods (in additional to date ranges) and the landing pages will include thumbnail images.

Julian Richards followed with a report of the current data aggregation status but first, he presented a case study in which the Portal performed research on ADS data given all the new functions previously described by Johan. Looking at the timeline of UK archaeological sites, these can be explored by filtering by the providers. In his example, data for Somerset, England, Dyfed, Wales, HES Scotland and HNM, Hungary illustrated how their data collections varied across the time periods in comparison to one another (as shown in the following illustration).

This data comparison can also be done by country. Other examples were for the terms “castle” (data spread over a long period) and “round barrow” which resulted in a tightly defined data time profile. Finds data from the UK and the PAN database (NL) can be narrowed by types of items such as buttons and Roman sites in East Anglia can be explored in the Portal with the latter one revealing settlement patterns through use of time periods. Using the enhanced Portal functionality with the metadata opens up many new possibilities. Julian suggested that statistical routines could be built into the Portal via a VRE as a further enhancement.

Proceeding to the actual aggregation activity, this is going well with new content being prepared from ROCEEH (paleoanthropology), tDAR records from Arizona State University (ASU) and Nabunken fieldwork reports from NARA, Japan. The Activity Dash tool is used to monitor and communicate the status of each partner’s data ingestion progress. As more metadata is uploaded into the Portal, adjustments and improvements are made to the mappings and aggregation process from the lessons being learnt. This experience is fed back as hints and tips for partners who are preparing their metadata for aggregation.

Achille Felicetti followed with an overview of the development of the CIDOC-CRM compatible application profiles for archaeological sub-domains which are to facilitate the integration of individual items (records) into the Portal. By enabling relationships to be defined at this level, it is possible to explore the data in answer to scientific questions such as: “Are the coins found at a dig similar to others in museums?”. He observed that different development strategies had been adopted by the groups involved but there had been no relevant exceptions or unsolvable issues to date. One result of this work was that the profiles defined for heritage science (CRMhs) and Ancient DNA will be aligned since there are many similarities. CRMtex (for texts) is being finalised and others are in development, e.g. for paleoanthropology and environmental archaeology (CRMhs with adjustments). The AO-CAT top-level ontology has proved to be sufficient for metal detector finds, remote sensing and geospatial data. In addition, a profile is now being considered for numismatics and all application profiles will be ready by the summer. The first part of the workshop session was brought to a close by Philip Buckland from the Swedish National Data Service (SND) who gave a 5 minute flash presentation on some considerations for item-level integration. This is summarised by the workflow shown in the slide below: 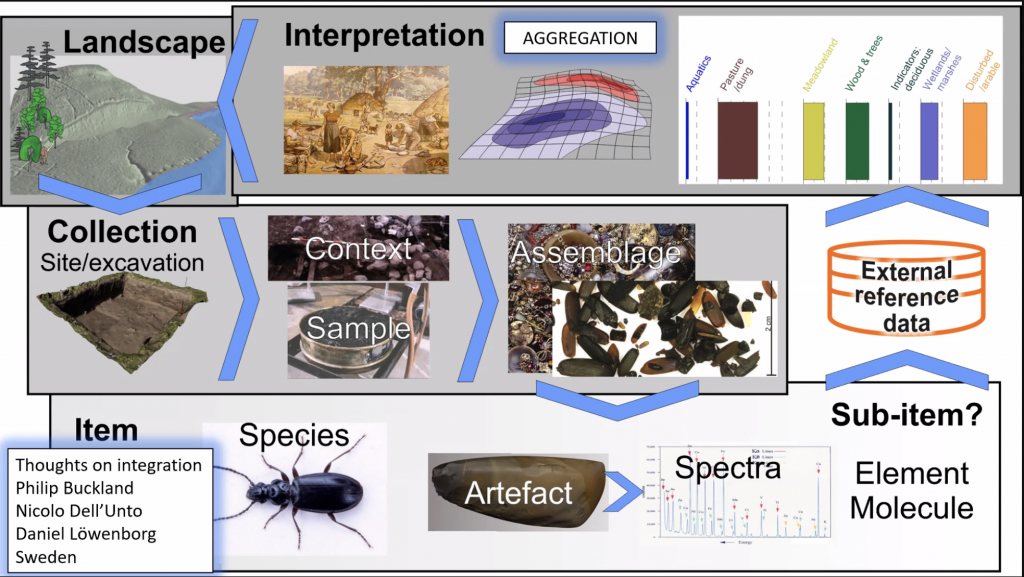 After a short break, the workshop resumed with two presentations on Virtual Research Environments (VREs). Carlo Meghini, who leads the technical development, provided an overview of the function of VREs, concluding that the project is currently gathering researcher requirements and experimenting with them. Guntram Geser then presented his vision for VREs. The ARIADNEplus thematic communities and pilots are each thinking about how VREs can be used and are preparing functional descriptions. The first workshop (see First VRE Workshop ) was summarised with plans for a second on Bio-archaeology and Environmental archaeology, these two sub-domains having much in common.

The workshop then moved onto the pilots. Carlo gave an overview of the services that are available for building the pilots. The existing Visual Media service is being upgraded to handle more data formats and display functions. In future, researchers will be able to view and add datasets associated with a visualization. It will also be possible to have visual documentation of an archaeological excavation which builds on the EpHEMERA system developed by the Cyprus Institute. Other services included text annotation with vocabularies expressed as SKOS, text mining and NLP. Finally, query services were also being developed to support the ARIADNEplus architecture e.g. used for populating data as it is being ingested using the Getty AAT with support from Wikipedia multilingual expressions. Franco kept his presentation very brief and reported that the pilots had met before Christmas and were waiting for services to become available.

The last three (plus an extra one not on the Agenda) items were 5 minute flash presentations on the pilots. Edeltraud Aspöck (OEAW) showed the Thanados project and summarised with a list of questions about VREs such as “would researchers be able to upload their own data into a VRE and what would the conditions be for registration and referencing the project?”. The 2nd presentation by Sara di Giorgio (ICCU-MIBAC) was on the Italian National Archaeology Portal. This pilot is using temporal GIS data for the Esquiline Hill in the ‘Heart of Rome’. Ten thousand records will be provided from 23 Italian Superintendencies (regional cultural agencies) to create the temporal layers with the pilot completing by the end of November 2022.

The 3rd presentation was given by Sorin Hermon (CYI) on 3D models as support for documentation and annotation. This pilot is based on the Ayia Irini Sanctuary and its figurines which were excavated around 100 years ago. Most of the statuary is now in museums in Cyprus and Stockholm, Sweden and by creating 3D replicas, it is possible to bring the whole collection together once more. CIDOC-CRM was used to record the data and this will now be updated to the CRMhs schema. Information from the 3D site-level modelling  is being used to compare the position, orientation and location of the statues with the archaeological layers described in the original site documentation.

A last minute addition to the workshop was made by Raphael Moreau (CYI) who is working on a multi-sensor scanning device to enable better data integration. Currently, one object may be subjected to several instruments which all produce different datasets. By combining certain operations such as macro X-ray fluorescence (MA-XRF) scanning, Fibre Optics Reflectance Spectroscopy (FORS) and Photo-Luminescence (PL), the data can be harmonised. In addition, the volume of data and strong correlation allows the use of statistical tools and the application of machine learning and artificial intelligence methods. The meeting was closed by Franco with all agreeing that the workshop was very stimulating.

AGENDA (as presented on the day)

The impact – current and future – on archaeological research and on the community – Julian Richards, UoY-ADS

Progress in aggregation: achievements, plans and the impact on the community – Julian Richards, UoY-ADS

The overall perspective and the contribution to the ARIADNE mission – Carlo Meghini, CNR
The VRE vision for the future – Guntram Geser, OEAW