ROCEEH Out of Africa Database (ROAD) available in the Portal

In September 2019,  Andrew Kandel of ROCEEH met the Project Director of ARIADNE, Franco Niccolucci, who was presenting the project at a workshop in Dragoon, Arizona sponsored by the Coalition for Archaeological Synthesis (CfAS). This meeting led to a joint workshop in January 2020 in Prato, Italy to define a roadmap for integrating ROCEEH’s Out of Africa Database (ROAD) of prehistoric sites and artifacts into the framework of ARIADNEplus. The data in ROAD extend the time range covered by ARIADNEplus much further into the past (up to 3 million years ago), therefore meeting one of the objectives of the project to extend the timeline of the data held in the Portal. As well, the ROAD data in the Portal will bring both sides more overall visibility in the archaeological community.

With over 2,000 sites and 14,000 assemblages, and growing, ROAD is one of the largest databases containing information about prehistoric archaeology, paleoanthropology, paleontology and paleobotany in Africa, Asia and Europe dating between 3 million and 20,000 years ago. Current ROAD users include mainly research scientists interested in conducting large-scale analysis of prehistoric data and through ARIADNE; the hope is to expand this audience to include members of the public who are interested in knowing more about the history of humankind. ROAD is an excellent tool for learning more about the past. It allows a user to download a PDF called the “ROAD Summary Data Sheet” for each locality. The WebGIS tool permits a user to visualise spatially search results on different map backgrounds, and to display interactively a summary of selected sites.

Overall, ROCEEH’s experience of working with ARIADNEplus was very positive. When the teams first met in Prato, they developed a timeline for implementation that was achievable. Despite some delays caused by COVID, they managed to follow the details of the plan. The mapping of ROAD subject keywords to Getty’s AAT and the creation of period lists for PeriodO went smoothly. However, the mapping of ROAD metadata (structure) to ARIADNE’s AO-Cat was a bit trickier, because the ROCEEH team could not find examples in the documentation that were relevant to them. In addition, it was difficult for them to predict how the ARIADNE Portal would display metadata. After a full run through ARIADNE’s aggregation pipeline, the ROCEEH team could finally see the results in the intermediate staging portal. Based on this, they could fine-tune the ROAD data export; for example, by deciding to pool similar records together, instead of displaying each data record separately. As of September 2021, the ROCEEH team are happy to announce that ROAD data are searchable and findable in ARIADNEplus!

Working with ARIADNEplus has brought other benefits to ROCEEH. It has made them more aware of how to integrate the FAIR principles (findable, accessible, interoperable, reusable) into their working model and prepare their database for a more sustainable future. The use of thesauruses by ARIADNEplus made them think more about the universal relevance of the datasets in ROAD, and how to increase the findability of the data. Additionally, the experience inspired them to create and establish Resource Description Framework (RDF) exports for ROAD, so that in the future ROAD data will be accessible through further gateways, like the semantic web. Likewise, ARIADNEplus have gained knowledge of managing databases such as ROAD. 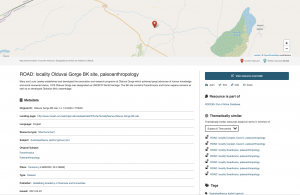 More than 2,000 prehistoric localities from ROAD are now findable in ARIADNEplus by simply searching for the name of a site (e.g., Olduvai, Dmanisi, Hohle Fels).

In addition to the basic information about a site displayed in ARIADNEplus, a user can enter a site name and download a PDF of the “ROAD Summary Data Sheet” directly from ROAD.

A user can also search for specific archaeological finds such as “lithics”, “symbolic artifacts” (art, music, ornaments), “organic tools”, or “ocher”, as well as other categories such as “paleoanthropology” (fossil humans), “paleofauna” (fossil animals) and “paleobotany” (fossil plants).

Finally, ROCEEH plans to continue collecting and maintaining data in ROAD. Therefore, ROCEEH plan to update the ROAD data in the ARIADNE Portal every six months until 2027.