Over 3.25 million records have been uploaded into the ARIADNE Portal by the end of October, with more to come. Sites and monuments from across Europe make up just over a third of the catalogue, the remaining records consisting of fieldwork reports and archives (22%), artefacts (17%), coins (14%) with more specialised categories such as inscriptions, maritime and rock art included. There are also nearly 8,000 scientific datasets to be found in the catalogue.

Metadata relating to coins make up over 14% of records in the Portal. The majority of these come from Europe (the UK, France, Germany) and also Japan. The Portable Antiquities Collection published by the British Museum make up around 91% of the coin records with the Archaeology Data Service in the UK contributing a further 4%. Other significant collections include the Portable Antiquities of the Netherlands, the DIME database from the University in Aarhus. Many of the coins were originally found by amateur archaeologists and metal detectorists with the remaining items coming from archaeological sites and graves. Coins from the Roman era dominate, peaking between 0 and 600 AD. 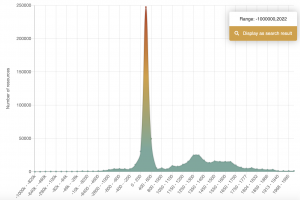 Coin record distribution by date in the catalogue

The development of the Catalogue and search facilities over the last four years has been a journey of challenges along with new possibilities that have opened up. For example, use of the Getty AAT has enabled multi-lingual searches and just in the last week, this particular filter has been upgraded so that all sub-categories are also included within the results returned. Consequently, if a broad term such as “weapons” is used, records relating to sub-categories such as swords, knives, pistols, cannons, clubs and the like will be included in the search results. This is important for some archaeological specialities such as numismatics where there are many terms can be used to describe coins. Now a search for “Early western world coins” (this being the main category used by the British Museum) will include denarius, staters and nummus and the many other terms used to describe specific types of coins within this wider category. Finally, all records which contain images now display a thumbnail of the first image in the search results which improves the efficiency of navigation for end users.