NARA, the Nara National Research Institute for Cultural Properties, has uploaded around 138,000 records from its database into the Portal providing a wealth of archaeological information from sites across Japan that range from around 30,000 BC to the 20th century. The NARA collection consists mainly of site reports which can be searched for specific items of interest within the Portal such as ceramics, tombs, household goods, weapons and jewellery using the Getty AAT Subjects filter (note that American spellings are used, e.g. jewelry). Each record contains a link to the NARA database where, in around 40% of the records, the report can be downloaded as a PDF. In other cases, there is a link to regional libraries holding the paper. Although the great majority of the reports are in Japanese, the reports are richly illustrated and Google Translate works well enough on the Kanji text to provide a basic understanding of the topic in question. 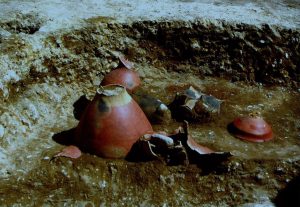 Exploring the data in the Portal reveals that the majority of site reports contain information about houses and related objects. Earthenware, pottery, porcelain and ceramics, which include Sue ware, also feature frequently. Jade, bronze and beads appear to be commonly used for jewellery. The area around Kyoto and Osaka, which includes Nara, has the highest intensity of site reports which is to be expected as Kyoto and Nara were former capitals prior to 1868 when this was relocated to Tokyo.

The images shown above are excavators working on the Goudo Minamikinoshita Site , Iiyama; and pendants and bracelets from the Enshōbōisekihachi Site, Saku.