Archaeology and cultural heritage are an integral part of the Italian territory, Italy being first in the world for the country with the greatest number of UNESCO World Heritage Sites (2021). Cultural heritage is not only the foundation of Italian identity, but also one of the main resources of the country, attracting tourists from all over the world every year.

Physics and Archaeology: the experience of the INFN-CHNet network

At a first sight, cultural heritage can appear not to be strongly related to fundamental physics and science in general. In fact, on the contrary, the Italian National Institute for Nuclear Physics (INFN) has promoted the birth of a network of laboratories throughout Italy (INFN-CHNet) that is specifically devoted to the development and application of new technology and scientific methods for the study and conservation of cultural assets. INFN is the Italian research agency dedicated to the study of the fundamental constituents of matter and the laws that govern them. Fundamental research requires cutting-edge technology and instruments, which are developed by INFN at its own laboratories and in collaboration with industry. One of the lines of research of the Institute is dedicated to the application of these technologies and instruments to other sectors, such as biomedicine and cultural heritage.

INFN-CHNet (Cultural Heritage Network) is the first INFN network ever established and it was formalised in 2017. The mission of INFN-CHNet is to harmonise and enhance the expertise of the Institute in the development and application of analytical techniques to the study and diagnostics of cultural heritage. To better answer the questions posed by cultural heritage operators (archaeologists, art historians, conservators, …), INFN-CHNet  is configured as a multidisciplinary infrastructure, including not only INFN scientific laboratories but also institutions with complementary skills to those of INFN, such as restoration centres, university departments and associations.  Some international research centres (currently in the United Arab Emirates, Iran, Jordan and Argentina) are also part of the network, making it an international infrastructure.

In the field of Archaeometry, the network laboratories have long-term expertise in dating organic or clay finds, analysing the composition of the materials for studying ancient technologies or for provenance studies, investigating the internal structure of the artefacts to understand the manufacturing technique or for risk assessment (e.g. to point out internal cracks or weaknesses).

To give an idea of some of the network activities, we report two examples of experimental investigations carried out by our laboratories: provenance study of Roman lead ingots by isotope analysis and radiocarbon dating of charcoals and bones from the archaeological site of Erimi Laonin Tou Porakou, south Cyprus. 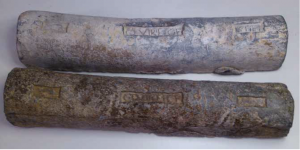 The extensive use of lead, since ancient times, is due to its good malleability and relatively low melting point. As widely reported in the literature, surface lead mines in the south-eastern area of Spain were massively exploited in the Roman period. Indeed, several shipwrecks carrying lead ingots have been discovered on the seabed of the Mediterranean Sea. Lead shows variations in the isotope composition depending on the origin of the mineral from which it is extracted. Thus, lead isotope ratio measurement allows for ascertaining the geographical origin of the mineral, helping to investigate the provenance of the finds and to retrace ancient trade routes. The Gran Sasso National Laboratories unit of the INFN-CHNet network has been involved in several studies for the determination of the geographical origin of archaeological finds such as Roman lead ingots as well as Punic, Greek and Roman coins. One such study was carried out on Hispano-Roman lead ingots discovered in three different locations of the western Mediterranean: Santa Severa (western coast of Italy), Ibiza and Torre de la Sal (eastern coast of Spain).

Lead isotope ratios, obtained by means of Thermal Ionisation Mass Spectrometry (TIMS), were compared with the available databases containing the isotope marker of the mines or geographical area expected to be the source of the related mineral; this information, combined with historical and archaeological considerations, has been used to identify the geographical origin of the ingots under evaluation. The mineral used to forge them belongs with high probability to the Cartagena-Mazarrón mines in South-eastern Spain.

Radiocarbon dating is, of course, a fundamental tool in archaeology to build strong, absolute chronologies. Even though in some particular cases it can be applied to inorganic carbon-based materials, radiocarbon is usually used to date organic findings. In spite of simplicity of the idea on which the the dating method is based, the application of radiocarbon dating to an archaeological context cannot be as straightforward as one may expect. A good measurement is the result of the close interaction between archaeologists and scientists and begins with a careful analysis of the context where the samples to be dated were found and with some fundamental questions. What is the event we would like to date? What is the relation between such an event and the material we are dating? What are the characteristics of the natural environment the samples were collected in? Is there any contamination likely in that environment? What is the past history of the collected samples? For instance, had they been restored? 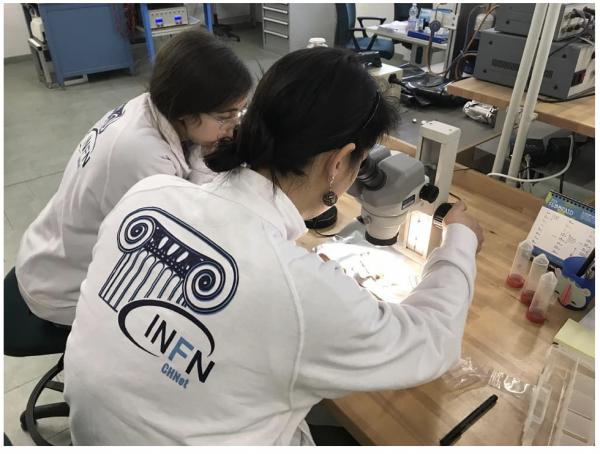 This is just the approach used by INFN-CHNet for this kind of research. In the framework of the INFN-CHNet activities, radiocarbon dating is performed through measurements of the residual radiocarbon concentration by Accelerator Mass Spectrometry (AMS), exploiting the dedicated accelerator beam line at the Firenze unit (LABEC laboratory). AMS measurements are performed on graphite solid samples with masses smaller than 1 mg. The laboratory is also equipped with ancillary set-ups to pre-treat and prepare samples from raw materials. Processed materials are e.g. charcoal, wood, seeds, paper, bones, textiles and carbonates from foraminifera.

Dating campaigns carried out on archaeological sites are among the activities of the laboratory and an example is the measurements in the archaeological site of Erimi Laonin Tou Porakou, south Cyprus. This campaign was conducted in collaboration with the Universities of Florence and Turin and was focused on dating charcoals from the workshop area and bones samples from the necropolis. There were many challenges to address. In particular, most of the tombs were multiple burials, so that collection of samples was performed thanks to the collaboration with anthropologists for the correct identification of individuals; in addition, the overall environmental conditions were such that they did not favour preservation of collagen, which is the bone fraction to be dated by radiocarbon. Measurements showed that the workshop complex was built some time before the utilisation of the cemetery and that it was abandoned more or less during the same period. The overall covered period ranges from around EC I until MC II-III (i.e. approx. 2300BC to 1900BC).

In ARIADNEplus, the partnership of the previous ARIADNE project has been extended, and also the fields of  application, such as scientific analyses for Cultural Heritage. INFN has thus joined the community, and is uploading the records of the archaeometric analyses performed by its laboratories into the ARIADNEplus portal. At the same time, INFN-CHNet is building its digital laboratories, which will offer multiple online services to INFN-CHNet researchers to store their datasets and reuse their raw data by following the FAIR principles, and to achieve integration and interoperability among shared information. These services are hosted in a cloud environment and are offered through a Web platform named Tools for Heritage Science Processing, Integration and ANalysis (THESPIAN). Currently, the available web services are:

These services will also be supplied to the ARIADNEplus community, both to scientific data providers, which may be interested in applying them to their data, and to archaeologists (mainly THESPIAN-NER for archaeological reports). Moreover, the integration of the INFN-CHNet records in the ARIADNEplus Portal will make the scientific data of the network virtually accessible for all the scholars in the community, fostering collaboration among the different groups involved in the project. Sharing tools and results will lay the basis for a stronger cooperation, which will raise the quality of research in Archaeology by the mutual exchange of expertise among the partners.