The ARIADNE Final event was held in Florence on Thursday 15th December. Dr. Daniela Toccafondi, the President of PIN, provided the welcome before the first presentation from Julian Richards who was responsible for overseeing the development of the new Portal and uploading of the data. After a quick recap of the origins of ARIADNE some 30 years ago, Julian reminded the audience of the measures of success he had talked about at the kick-off meeting relating to quantity and quality, e.g. no. of records in the Catalogue, no. countries represented, granularity of the data, etc. With an expected delivery of 4m records by 2023, representing over 50 countries and covering prehistory to modern times, ARIADNEplus can be considered a great success. The Getty AAT hierarchy for search results demonstrates the power of the search function and the geographic locations on the map is the most popular aspect of the Catalogue. In terms of granularity, the THANADOS grave datasets can be explored from the level of the cemetery, the grave, the burial to the individual artefacts (and vice versa). He highlighted other aspects made possible by the Portal such as enabling new forms of research by looking at finds locations to identify possible new sites. Other uses such as heritage protection (in Argentina) had also come to light. He concluded by noting that the Portal technology can be used and customised for other projects such as UNPATH’D WATERS (mapping UK maritime resources) that the University of York is now involved with.

Dr. Eugenio Giani, the President of Regione Toscana, than gave a speech on behalf of the regions cultural heritage before the next presentation from Carlo Meghini who directed the technical development underpinning the Portal. Carlo talked about the Knowledgebase and all the underlying technologies such as aggregation and semantic tools before moving onto D4Science which underpins the ARIADNE data infrastructure. He explained how the data is FAIR and the infrastructure was connected to the EOSC and also described the VREs used by the project for purposes such as the data mapping and aggregation as well as the Lab which enables archaeologists to directly interrogate the Knowledgebase using tools such as R, GraphDB and JupyterHub. 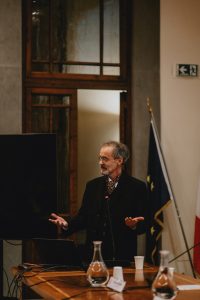 After a short break, Guntram Geser, the Director for Impact and Innovation, presented an overview of the project’s progress starting with the Community Needs survey results. Regarding progress towards achieving specific aims, there was still some way to go although the situation is improving. For example, there are now 14 countries in Europe with data sharing policies but only two of these are mandatory. Regarding the next 5-10 years, Guntram highlighted the need for Open Data for Open Science, Cloud-based Research Infrastructures, VREs that are co-designed by domain researchers and technologists and the increased use of machine learning, especially in applications such as LIDAR.

Finally, Franco Niccolucci, the ARIADNEplus Co-ordinator, made his much anticipated presentation on ARIADNE forever: the way forward.  For the last few months, Franco and his fellow project directors have discussed the options for sustaining ARIADNE and decided on setting up a AISBL, a not-for-profit membership organisation. All existing partners would be invited to join once the registration documents had come through in the New Year. The ARIADNE RI AISBL would enable activities (e.g. uploading new data to the Portal, promoting best practices such as FAIR data etc.) to continue in the future as well as providing an umbrella organisation which could apply to take part in future research projects on behalf of its members. Franco concluded with an announcement that further details would be provided to the partners in the meeting to be held the following morning.